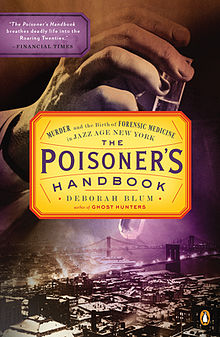 Whether you obsessively watch Investigation Discovery, are a devout Ann Rule reader, or became hooked on true crime through podcasts, this book club is for you! Each month, we'll be discussing a different true crime book.

Registration is not required. Books are available on a first-come, first-serve basis. Stop by the service desk for more information.

March date change to March 28th as the Library is closed on March 21st for Staff Inservice.

January 17 – The Poisoner’s Handbook: Murder & the Birth of Forensic Medicine in Jazz Age New York by Deborah Blum
February 21 – The Wicked Boy: The Mystery of a Victorian Child Murderer by Kate Summerscale
March 28 – Under the Banner of Heaven: A Story of Violent Faith by Jon Krakauer
April 18 – Killers of the Flower Moon: The Osage Murders and the Birth of the FBI by David Grann
May 16 – The Stranger Beside Me by Ann Rule
June 20 – Columbine by David Cullen